Since mid-2008, just before I left my last permanent job, The Man and I have had two cats. The original two were tiny litter-mates; one male, one female. I remember the night we got them home – the poor, minuscule things were petrified of this new big walled place, and they hid all evening under the table in the corner. The female protected the male, dear love her.

She was always a very good cat, though he certainly had his moments as a kitten. He got himself trapped in a vacant house when he was maybe six months old, for example. But he didn’t get himself mowed down by a car when he was three years old, like his sister fatally did 😦 We still miss her, over a year later.

At the time of her death her brother was, understandably, upset and unsettled. From our perspective, we didn’t want a second cat until we had time to deal with our loss – and perhaps in retrospect, we should have listened to that instinct. However, we tried to think from the cat’s point of view – he had no feline company, and in any case, we didn’t want him coming to be used to being alone and subsequently being horrified when we did finally get another companion for him. So, in the wake of our female’s loss, we acted relatively quickly and got another kitten.

He was supposed to be a she. He wasn’t, as it turned out, when we took him to the vet for his first vaccinations, so as cat owners we still need an education (admittedly, we had tried to find out the obvious differences between the sexes, but…well, we failed.) Even though Cat the Older, as I have taken to calling our original cat, was neutered, we still didn’t think two males in the house would be a great idea. Our vet, optimist that he is, advised that once Cat the Younger was also neutered, there would be no issue between the two of them.

The Man thinks that Cat the Younger is a sociopath (initially, I would have argued ‘psychopath’, because to the best of my knowledge the cat has not been exposed to any social factors that could contribute to sociopathy. However, on balance if the animal does have a form of anti-social feline disorder, I think The Man is probably correct; Cat the Younger does have the capacity to attach to others, and he is not in any sense organised [see the work of Anthony Walsh and Huei-Hsia Wu for an explanation of this.]) Personally, I thought he was just being a

kitten – but despite our vet’s claims to the contrary, he didn’t particularly calm down once he’d been neutered, nor even at the apparent advent of his adulthood when he reached the age of one in August – although I think he’s now finally starting to settle. The Man is reluctantly considering this possibility.

I could go into great detail about why he’s been a handful, but instead, I’ll just throw a few bullet points out there by way of explanation:

The latest saga involving Cat the Younger is that, in an unwitting homage to his adoptive brother, he too got himself trapped in an empty house. 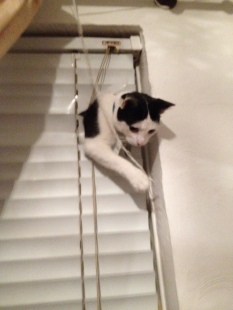 No, by the way, he was not the living victim of a locked room mystery (though that would at least be interesting) – quite a few people on Twitter seemed perplexed by the fact that he got in with such apparent ease, but was unable to get out. What appears to have happened is that there were builders/decorators in the house last Friday, and the brainless kitty entered during this period. They mustn’t have realised he was there, though, because by Saturday evening we noticed his absence. On Sunday, knowing he’d rarely be away for 48 odd hours, we were slightly concerned. However, it was that evening that a bloke that had encountered him before came round and advised us of his whereabouts.

We went round and fed him through the letterbox – idiotically but necessarily pouring water through it as well – and assumed that by the following day (the Monday), it would all be over. I mean, you expect builders/decorators to work weekdays, right? And the house certainly isn’t finished – nowhere near it. There are ladders everywhere, there’s a cement mixing skip thing in the front yard, and one can see furniture cover thingy-ma-bobbers lying around all over the show. It seemed a reasonable assumption that the workers would be returning, and that they would be doing so quickly.

Of course, with Cat the Younger being Cat the Younger, nothing is ever straightforward. The builders did not return on Monday – nor did they return on Tuesday, yesterday or today, Thursday. He’s been trapped inside the residentless property since Friday 28th September – and that’s almost a week of lonely captivity for the poor thing 😐

And we have tried everything we can think of, short of breaking in, to free him.

8 comments on “CATastrophe – Part One”